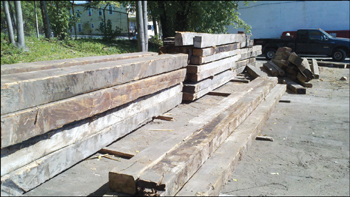 First the Boston Hides and Furs building on Marginal Street burned. Then came the tropical storm a few weeks back and the building’s roof collapsed. Company officials said the building was largely unused.

Earlier this week, the building was torn down and its major wooden support beams salvaged by a Chelsea company for reuse at another location. “We’re not doing anything with it. It will be a parking lot,” said company official Antionette Adreatola.

The buildings major wooden beams were salvaged by Arnold Jarmak, the owner of a local company dealing in wood reclamation projects.

Jarmak’s company recently supplied the wood for the flooring used in the new Legal Seafoods in the seaport area of the waterfront in Boston.

Boston Hides and Furs officials said they were considering taking some action against the city because of the lengthy and costly fire watch placed on the rain soaked building by the fire department after the roof collapsed.

“There was nothing inside the building that could burn,” said the official.

Call 617.548.1829 and let us assist you with your project. Historic wood is what we know and love! Are you into reclaimed wood as much as we are?

Sign up for our newsletter by entering your e-mail address into the window on the navigation bar above to receive the latest updates from Jarmak Corporation.